Background:
It was an Undergraduates Curricular-extra Academic Science and Technology Competition. I was the project leader and covered most of the programming and algorithms designing work. We designed and made the Intelligent Navigation And Tracking Robot in one year. And we ended up with winning the first prize in Beijing and was the only team in my university that gaining the qualification for national final 2013, where we won the second prize.

1. Overview:
The intelligent navigation and tracking system is a robot, featuring autonomous tracking, navigation and Bluetooth control. It is applicable in supermarkets, restaurants, construction site, etc. The rationale of this system implements wireless location with ZigBee and other functionalities with the support of multiple sensors. The application of ZigBee is environmentally friendly since it consumes a small amount of energy. 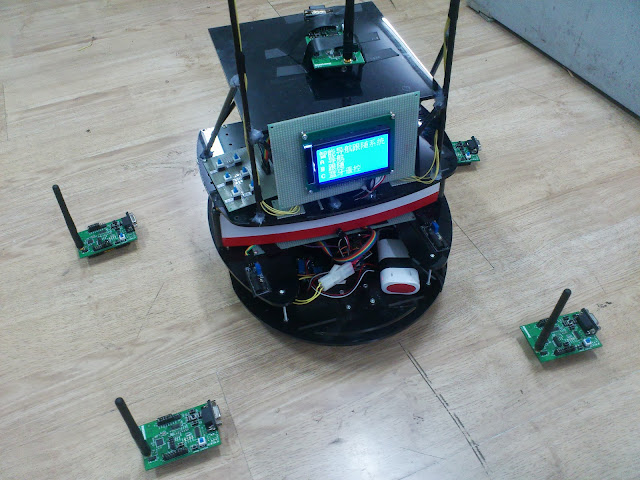 2. Architecture:
The system is composed of three parts: the Robot, the ZigBee modules and the Bluetooth Controller. The Robot is driven by three micro controllers, which controls the sensors such as, the ZigBee receiver, the Bluetooth receiver, the infrared sensors and the ultrasonic sensors. The ZigBee modules contain six nodes: four nodes distributed on the robots working area, one node on the robot apparatus, and the other connected to the computer. 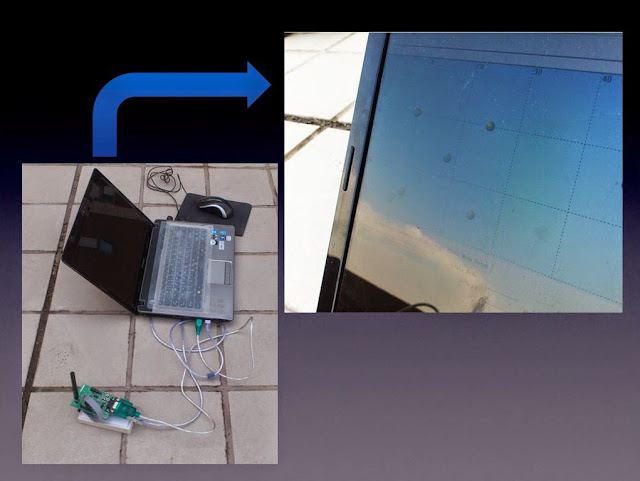 3. Functional Modes:
The system can work in three modes: [1] navigation, [2] tracking, and [3] Bluetooth controlling. The main function, navigation, is made possible through the ZigBee modules. The modules calculate real-time location of the robot and transmit to the micro controller on the robot, which, through selecting algorithms, determine the speed and direction of the robot using minimal energy. The tracking mode, on the other hand, utilizes two ultrasonic sensors to allow the robot to percept the direction of the users motion. Moreover, the robot can avoid collision with obstacles by using the infrared sensors. Finally, using an Android-base application, the robot can be remotely controlled through Bluetooth module. 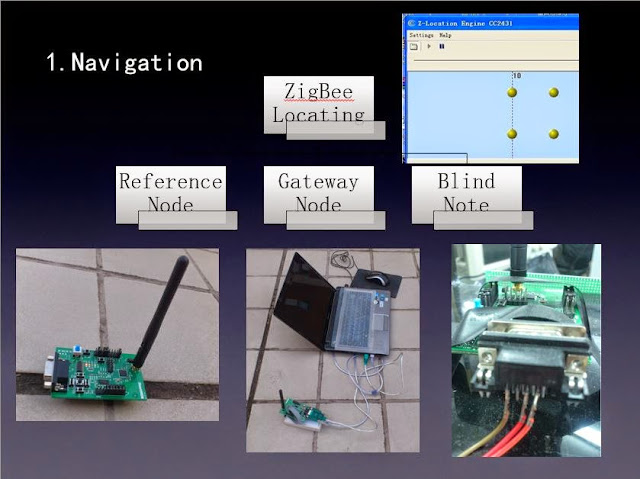 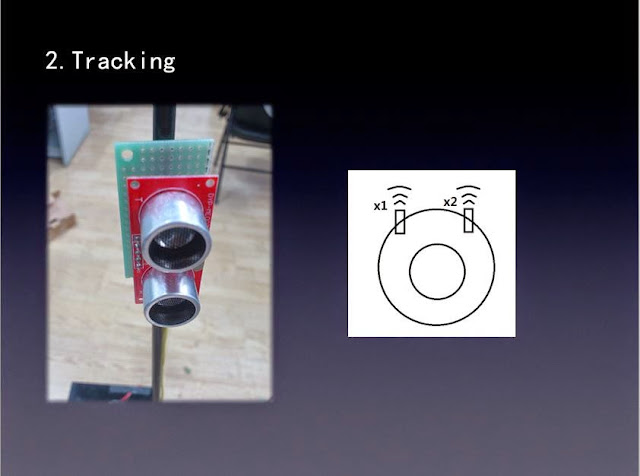 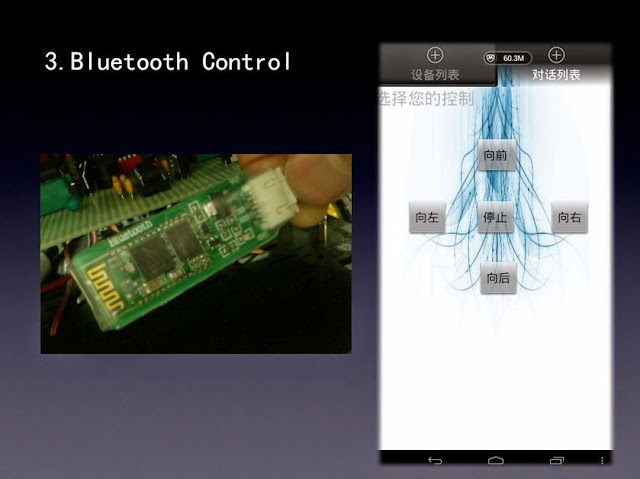 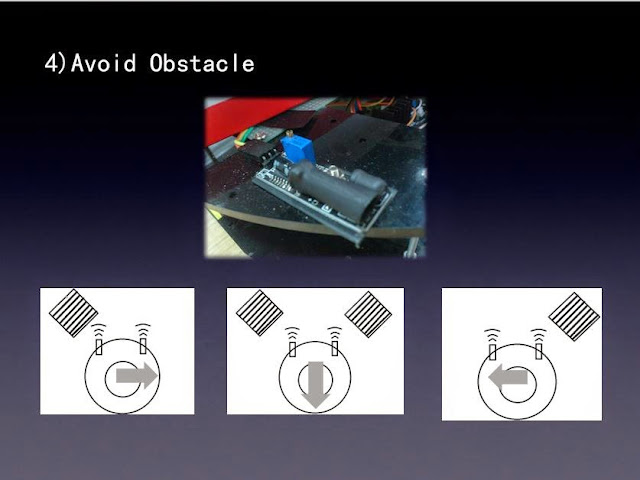 4. About This Team:
Our team consists of six junior undergraduates from the School of Electronic Engineering and Information at Beijing Jiaotong University. The team leader, Zhang Lingkang(,myself),Kan Chunxiu() Gao He, are pursuing a major in Telecommunication, Zhang Yeman and Chen Pengxu majoring in Electronics Technology and Zhang Jingyu majoring in arts designing. The team leader oversees the progress of the team and completed most of the algorithm design and programming work. Additionally, to ensure the accuracy of the Robots path selection, he conducted multiple and repeated experiments. Zhang Yeman is in charge of the circuit designing and welding; Kan Chunxiu completed the module of Bluetooth Control. Chen Pengxu and Gao He, on the other hand, focused on the Zigbeethe most important module of the navigation systemensuring flawless performance in both indoor and outdoor environments. Zhang Jingyu designed the whole structure and appearance of the robot. 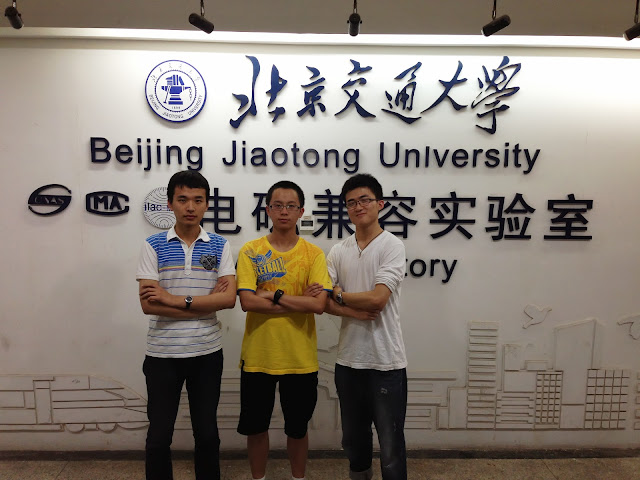 5. Working Procedure:
After substantial research, we devised several different plans and subsequently evaluated the feasibility of each one and decided on our aforementioned plan. The aim of the project is to build a platform that will lower energy consumption and better user experience. The framework of the robot was built with CAD and black Acrylic sheets. Subsequently, the three of us worked separately on: the circuit designing, algorithm programming and Zigbee set-up. Though working separately, we cooperate closely with one another for it neither possible to program while unaware of the circuit nor can we design the path-selection algorithm without knowing the working process of Zigbee. At last, after many trials, the robot moved accurately to the destination via the shortest path with the least energy consumption. 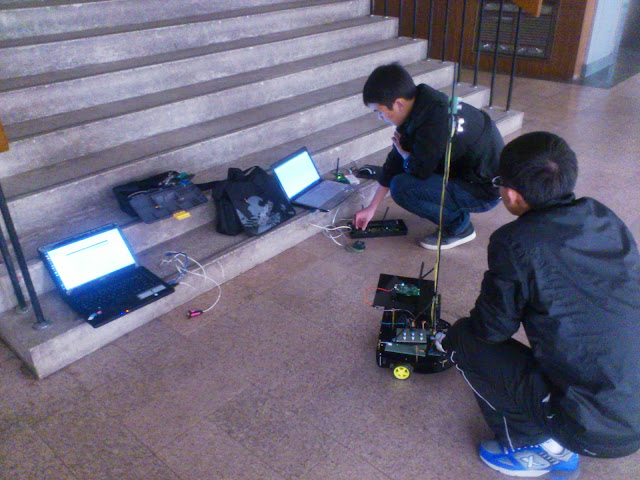