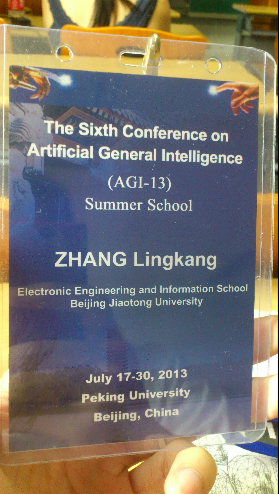 http://www.mindmakers.org/projects/agi-summer-school-2013
I attended the AGI 2013 Summer School last month, which was really impressing. At the very beginning, I was just interested about artificial intelligence and did not know what Artificial General Intelligence was. And during the summer school, I was acknowledged about the basic concepts of AGI and three AGI projects.

When ‘Artificial Intelligence’ was introduced at the very beginning in 1960s~1970s, the aim was to build a machine which can think as the human beings. Undoubtly, the AI scientists at that time failed to build a human-level intelligence machine because of the limit of the technology. After that, the main stream of artificial intelligence research had turned to Narrow AI, and expert system was actually the first successful AI software. The expert system consists of three parts, the knowledge base, the inference engine and the dialog interface. As for Narrow AI, the mainstream AI since 1970s, most of the research are focusing on such specific areas as pattern recognition, computer vision and neuron nets, which has achieved great success. However, the Narrow AI, or Applied AI, is focusing on domain-specific or problem specific solutions rather than treating intelligence as a unity of cognitive functions that can be applied to different domains. With the development of the technology, AGI comes back to the scientists sight again.

Artificial General Intelligence, which is also refered as Strong Intelligence, attempts to simulate the full-range human cognitive abilities. As far as I am concerned, I think AGI has two characters: one is that it can provide solutions for problems in various kinds of domains, and on the other hand it can program by itself and rewrite some part of its code rather than adjust the value of some variables. During the summer school, three professors introduced their projects: Pei Wang’s NARS, Kristinn R. Th