Get Started With ABS (Agent Based Simulation)

ABS is short for Agent Based Simulation, or Agent Based Modeling. I was acknowledged to this from my tutor, Pro.Guo. She is doing some research in data mining and some of her projects are on the recommendation algorithm applied to video websites such as Youtube. And the problem is that the traditional simulation cannot give accurate feedback she needs. And using ABS may be the best way to solve her problem. I happened to have some interest in data mining and big data, so I decide to get started with ABS this month.

ABS has been widely used in sociology and ecology for many years. With the development of Computer Science and the coming of Big Data Age, ABS will surely catch more attention from relative researchers. You can get some brief introduction to it on wikipedia:http://en.wikipedia.org/wiki/Agent-based_model
http://en.wikipedia.org/wiki/Agent-based_model

Some websites and essays are also strongly recommended if you are interested on it:
a guide for newcomershttp://econ2.econ.iastate.edu/tesfatsi/abmread.htm
a great blog:http://www.agent-based-models.com/blog/
a template model and some platforms:http://condor.depaul.edu/slytinen/abm/StupidModel/
an essay introducing ABS platforms:http://www.sci.brooklyn.cuny.edu/~sklar/teaching/s10/alife/papers/railsback-sim06.pdf

At last, a book on it is worthwhile to read:
Agent-Based and Individual-Based Modeling: A Practical Introduction (Steven F.Railsback and Volker Grimm) 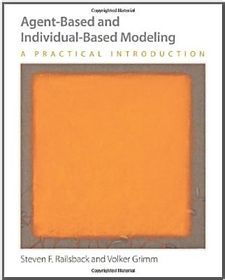